Puerto Rico is not your typical running destination. Hot and humid, one would think that the island lends itself much better to sandy beaches, cool Piña Coladas, and Salsa music. Yet, we found quite a running culture on our Yoga and Running Retreat.

Our trip started at 7am when participants met for an optional morning run through Condado and Ocean Park, two beachside neighborhoods of San Juan. The air, cool from the night's ocean breeze, felt perfect for the run. After quick introductions, our group leader, Slava Kolpakov, from Running Treks Adventures, lead us through a series of dynamic warmups and explained our easy running route.

We jogged lightly, meandering between the beach and quiet streets, stopping to take photos, and learning about others in our group. Two miles into the run, we arrived at a local running track, and Slava announced that we could do a few laps, and meet some local runners.

The track bustled with activity at 7:30am. Two or three running clubs sped through their interval workouts as coaches shouted pace numbers and split times in Spanish. A couple of shirtless guys with boxing gloves practiced drills in the shade of nearby palms. Cyclists treated the track as a resting stop, filling their water bottles at a water fountain, and stretching their legs.

Some of our runners made an effort to huff out a few laps at a faster pace. As the air thickened with humidity, Slava motioned for us to get back on our way.

After cool showers and breakfast, we headed inland to Casa Grande Mountain Retreat, our hosting site for the weekend. The two-hour ride from San Juan was spent chatting with fellow participants and sharing our common love of traveling, adventure, and, for most of us, running.

Located in Central Mountains of Puerto Rico near the town of Utuado, Casa Grande sits in a deep valley surrounded by steep mountains that catch the morning fog, or the white puffs of low-lying clouds. The fog dissolves once the sun clears the mountain edge and the air gets pierced with brilliant sunlight which sparkles off of myriads of dew-laced leaves of every shape and size. The first impulse of most visitors is to reach for a camera, only to realize that the photo of this place will never do it justice.

Casa Grande has a world-class restaurant with a variety of options to suit any taste including gluten-free and vegan. Each cabin has a balcony with a view best seen from a hammock provided.

Our optional morning runs started at 7am. Some participants chose to sleep in and joined the yoga class at 8:15am. We ran on a local road leading out of Casa Grande and along a rapidly rushing stream. Running silently in the early morning, with the mind quiet and introspective, we would pass giant palm leaves hanging over the road and watch the colorful birds darting overhead. Local fishermen would usually look up to wave at us as we ran by. We had a few minutes before yoga to dip into the fresh water pool at Casa Grande after the run. The water in the pool was cold but perfectly refreshing, having absorbed the essence of the morning dew from the night-time mountain air.

Each yoga class served a specific purpose. Slava led us through a moderately challenging Hatha yoga class at 8:15am, targeting all major muscle groups for strength and flexibility. These classes were open to other guests at Casa Grande. The evening yoga class at 5:30pm was for our group only, and focused deliberately on stretching and strengthening for runners, and addressed our specific concerns.

On our first day trip we ventured out to the beach in Arecibo, a small town mostly known for its Lighthouse and the Arecibo Observatory. We spent the day on the beach, sipping local coconuts, swimming, and having picnic lunch. Participants shared their stories and interests and made good friendships over the course of the day.

On the second day we relaxed at the Casa in the morning, packed sandwiches for picnic lunch, and embarked on a long hike up the rushing stream to a hidden waterfall. Our guide was Jose, a local chef, who lived and worked in Rochester, NY for many years before returning home to Utuado. After two miles on the road, Jose boldly stepped into the stream and announced that this was the only way to get there, walking upstream.

Most of the stream was shallow, with occasional waist-deep drops, so we edged by carefully following Jose's expert guidance. On the way, he indicated different varieties of plants and flowers, plucked some local fruits off the trees, and carefully lifted leaves to show our group where coquis (tiny frogs with loud chirps) hide. We made it to the waterfall in about an hour. The wide basin was deep enough for jumping and somersaulting into the cool water. After enjoying the waterfall and lunch, we headed back to Casa Grande. This hike was definitely one of the biggest highlights of this trip.

On our last full day, Slava signed up any willing participants for a local 10K race. San Antonio Abad 10K race takes place every year in the town of Anasco near the well-known surfing town Rincon.

We met local runners before the race as we warmed up, even though 88F degree heat and high humidity felt like we were surrounded by a hot wet blanket. We ran for the experience, not to compete, yet we wanted to see how we stacked up against the local running scene.

The field of runners represented at the race seemed surprisingly competitive: multiple local clubs and collegiate runners. Many of them seemed to know each other and there was great camaraderie at the starting line. As the case with most races, runners sprinted off when the gun went off. It was a flat well-marked course. We enjoyed the scenery and even managed to take photos on the run. The winner crossed the finish line at just over 30 minutes, a 5-minute per mile pace despite the heat. Even the age group runners were speedy. Past the finish line, a long overhead shower-sprinkler was rigged up to cool off the runners.

As the race ended, the town celebration began. Local bands performed on two stages around the town square, which was busy with food vendors, carousel rides, and hundreds of local families enjoying the night out. We mingled with the running crowd for another hour, and headed back to the Casa for a late dinner.

Overall, the retreat in Puerto Rico was a perfect mix of outdoor activities, culture, chill time to relax, yoga, and running. 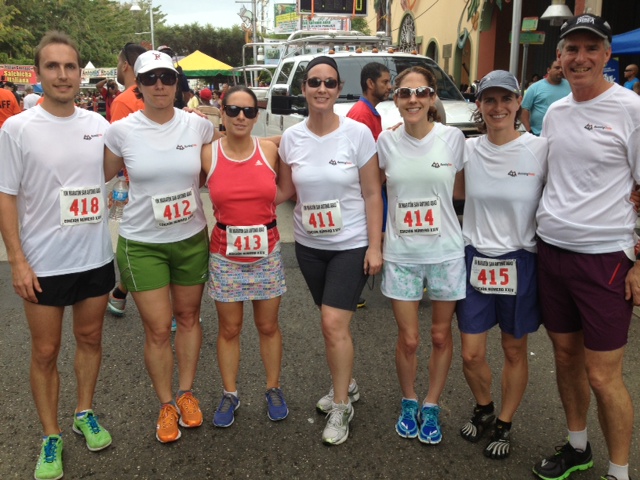 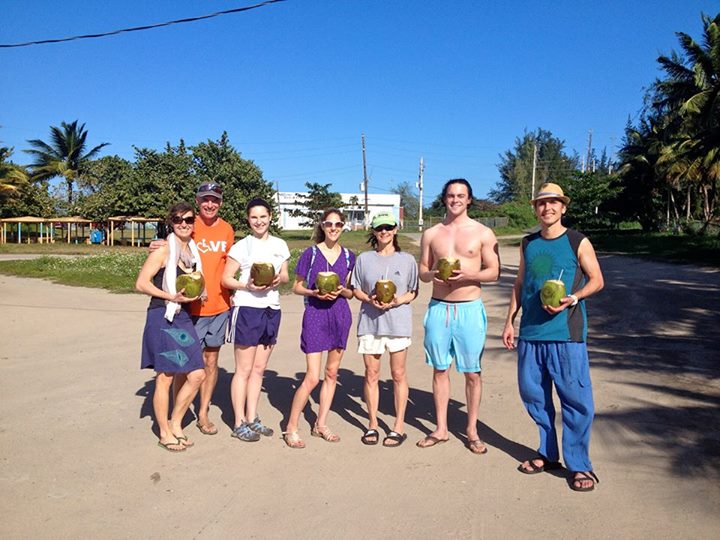 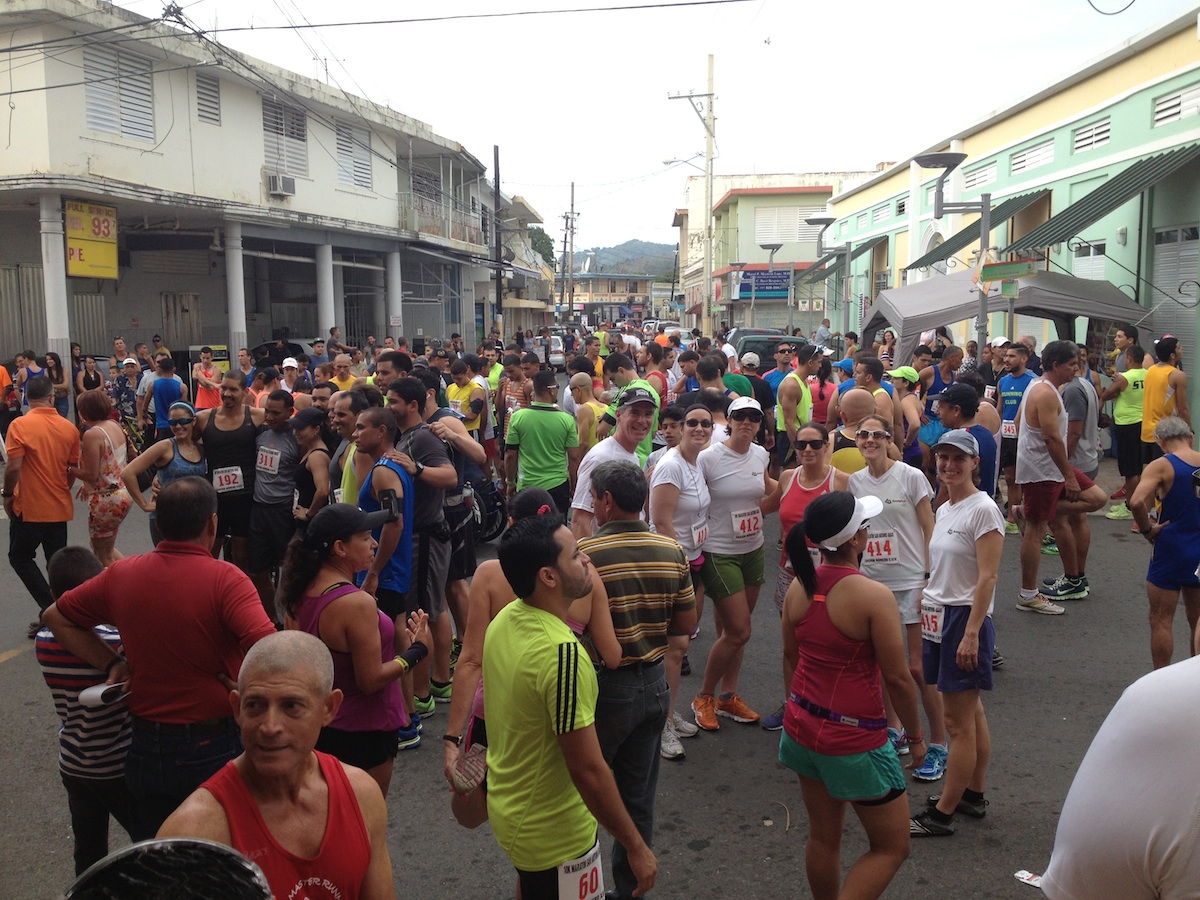 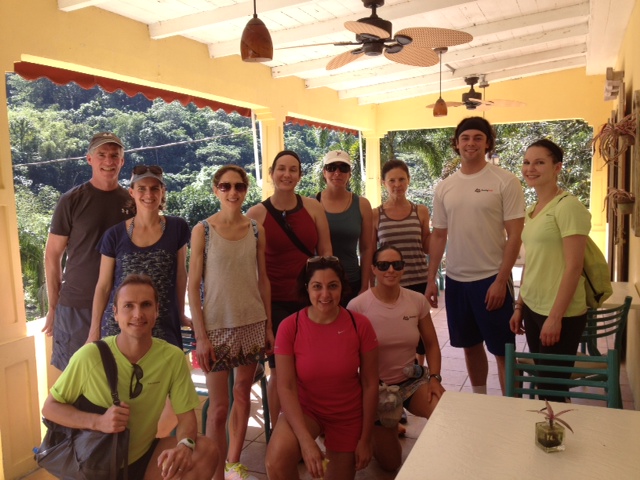 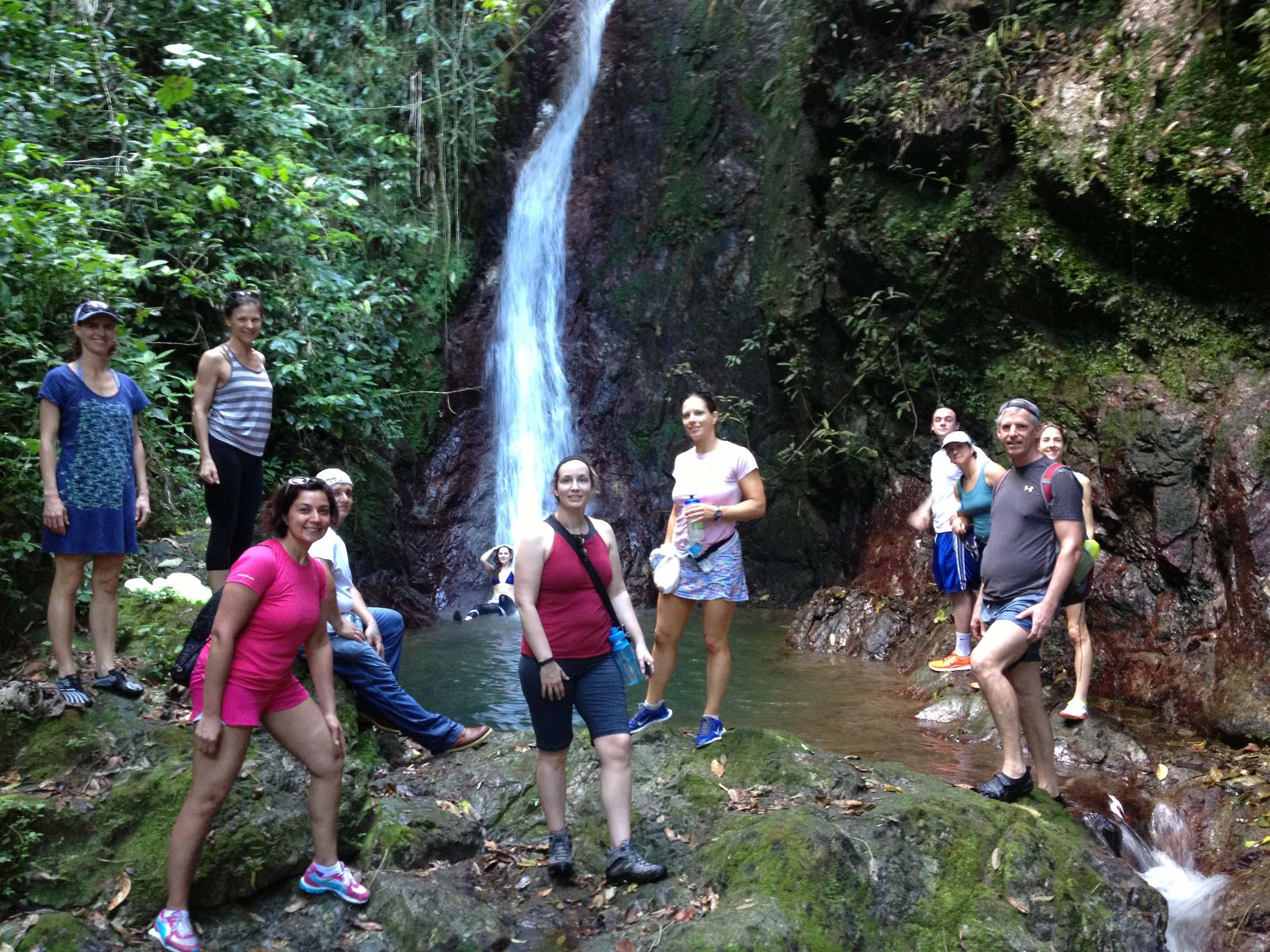